On April 29, 1967, my family took its first expedition to the newly opened Expo 67.  Soon after, my mom wrote an account of the day.  Here is that account.  I was five years old. My grandparents weren’t there that day.  This photo was taken some other year (not sure which) when they came to visit.  My grandmother must have taken the picture. 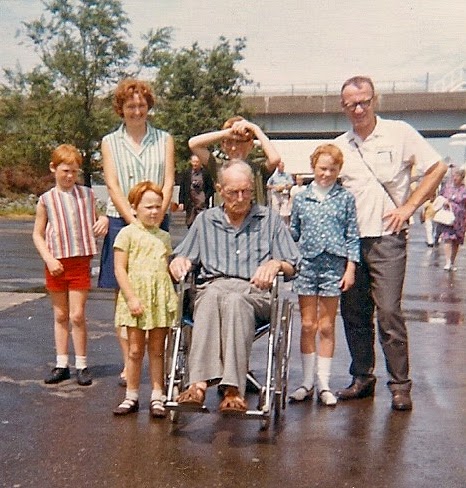 High excitement and a few howls at breakfast and dressing and leaving activities. But we got away bright and early for us--9:15. Drove over Victoria Bridge with dire warnings from Murray and Kathleen that you can't get to Expo from Victoria Bridge. They proved right—they and the map. We had to first get into Montreal and pretend we didn't come from the South Shore, and get ourselves onto the new express highway that rolls down beside Expo and under the Victoria Bridge. There, we kept getting waved on because we weren't a taxi or a bus, and finally stopped, facing the wrong way in a one way curve, to let everyone out. Kathleen and I then took a few wrong circles before we got ourselves back into town and over the Victoria Bridge, to park over near Longueuil in order to get a bus down to the subway. All this was to avoid that $2.00 parking fee, or an excess of subway fares.
As we left the car, we realized that we had left Kathleen’s passport with John. So my first entrance into Expo was a rather frantic race to find the Mexican pavilion where we had all planned to meet, and get the passport back to Kathleen before she got too unhappy waiting outside the gates. I didn't succeed, The Mexican pavilion was not open--the only one that wasn’t finished, and after an impatient wait I returned to Kathleen to find her weeping into the fountain. In the meantime, John and the other three had been waiting patiently at the subway exit on the opposite side of the subway station from the one we used. Jean’s "There they are" was the best sound I heard that day. United we set forth, first of all rejecting the idea of having a stroller for Mary as being too expensive ($3.00).

John and the other three had made a triumphant entry in the main gates and were such a beautiful looking bunch·of healthy red-headed Canadians that they were immediately nabbed by some female with a TV crew who proceeded to interview them. They then rode the Expo Express to Place des Nations and walked over to the subway station to find us. With 400,000 other people with similar ideas about what to do (minirail ride) and see (American, Russian, Canadian pavilions) first, we could have spent the day in lineups. But lineups if longer in duration than about 30 seconds tend to send our youngest two over the edge, so we steered clear of them. We shared the cosmos walk with crowds and found our way to the steel pavilion, which looked nicely deserted. Inside were the sounds and smells and darkness of a steel mill with lots of explanations of the process. However, we moved right on through at the rate of interest of the youngest and found ourselves in a large foyer with ramps to be ascended and posts to be run around and some comfortable-looking seats to rest our feets and look out towards home, and Expo Expresses whipping by. Also washrooms. Outside we found a little green hill and we parked out of the wind to eat our lunch. Fortunately, we were finished before we saw a guard whistle someone else off for lunch eating. John was wondering at approximately the same time why all those other people were sitting on benches to eat their lunches instead of on this nice grass among the little evergreens.

Refreshed, and in spite of the complaints of the youngest two about walking and the oldest two about not spending the next hour or so in a minirail lineup, we walked on down the avenue past Mexico, India, and many others, and down by the canal. Mary found more excitement in a little round disk racing along in the wind making a musical tinkling on the pavement than in the displays of architecture built for her amazement. Throwing gravel into the canal was another contact with "man and her world" for her.
From canal level we entered the huge Theme building complex from below and were awe-struck by the atmosphere. Great unpainted rusting steel girders rose in a sort of Eiffel Tower type of construction (at least at the bottom--and so it seemed to me, never having seen the Eiffel Tower except in chases in movies). I don't know what could be more expressive of the building powers of human beings on the surface of earth. We made our way up through the steel to the Expo Express Ile Notre Dame station and had a very pleasant quick ride around to Ile La Ronde for amusement.

We found a great many other people had beat us to it! John and I look forward to wandering about it after dark sans kids.  We followed the broadcast lure of “Children’s World” and found a lovely ride on little yellow engines, following tracks in and out of tunnels and over hills, which they all enjoyed.  Murray had his eye on the Gyrotron but it is in for repairs.  After the bell-ringing horn-blowing ride over hill and dale, we went down into a lovely sand pit full of clean warm sand, sheltered from the wind.  There is a big varnished wood sculpture to be climbed on and in and out.  So off came three pairs of shoes and socks for a rest playing in the sand.

John and Murray went off to investigate the aquarium, to see if it was sufficiently uncrowded to try today. But it is not open until May 5. They returned with six ice cream cones which we enjoyed absolutely. We stopped to admire a screaming fast ride, then went by Expo Express on a scenic trip all the way to the other end of the line.  We decided to call it a day, so John and three got off near Habitat 67 which they inspected while Jean and I went on to the subway and got the car to pick them all up again.  It was a pleasant walk past Swan Lake with its fountains, beyond which could be seen the Calder statue, or sculpture of “Man", and past tantalizing pavilions.

At Habitat 67, after inspecting some apartments, John says they went up and on and were prepared to inspect another when a friendly guard informed them that it was Prime Minister Pearson’s apartment.  He was out at the hockey game though, so they didn’t stop to tea.


John and I collapsed when we got home, while the kids went out to skip and play ball.

Mary, when asked Sunday morning where she had been and what she had seen, said “Expo. Flags, and like lollipop things…and sand…and train engines with no cars and no caboose…and sand…and bare feet….and….more bare feet—Jean’s.”

*wear and tear on shoe leather