“Big Canadian Stuff” could refer to the large fun things that we like to build in our towns; like turtles, lobsters and potatoes. But there’s no need for me to do this since Canadian author Will Ferguson has done a perfect job already in the article “Wawa to Black Diamond: A Cross-Canada Tour of Big-Assed Objects by the Side of the Road”, in his book Canadian Pie.  I’m content to have forced my son to accomplish that Canadian rite of passage: getting your picture taken with the Wawa goose.

﻿
My “Big Canadian Stuff” has to do with industry; the kind of thing I notice only thanks to friends and family.  My childhood would have been one endless daydream—paddling contentedly in the Seaway pool in St. Lambert near Montreal, watching giant ships go by without ever wondering where they came from—were it not for my parents’ expeditions to the St. Lambert Locks.  These were the first on the Seaway, and we went there for no better reason than to watch a big ship rise or fall.  Left to myself, I would never even have wondered why there were a set of giant gears and pulleys so close to my house. 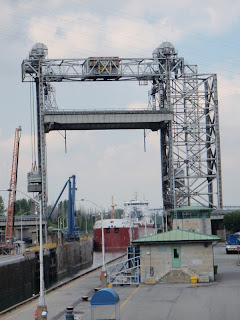 My parents also took us to a vantage point to watch the Expo Islands being built, and went riding with us on the new Metro, just for fun.  If the Big Stuff was there, we all had to see it.  Many years later, it’s thanks to my parents that my kids rode every glass elevator in downtown Montreal.

Daydreaming doesn’t end when adulthood sets in, and I still need the help of friends and family to notice the Big Stuff…even in one of my favourite places in Canada: the Tantramar Marsh.  The Marsh is the final leg of the train trip from Montreal to Amherst, Nova Scotia; a trip my family often took.  Whenever the train crossed the Marsh, I was aware that there was a Thing there; a Big Thing.  But my attention was taken by the vista of green, the grazing cows, the tidal river and its tantalizing toe-sucking mud.  Years later, while travelling there by car and gazing just as lovingly out the window at the Marsh, I was surprised when my husband (formerly a ham radio operator) turned our car into the Thing’s driveway: “It’s a radio tower; I want to see it”.  Not only was it a radio tower, it was the shortwave relay station for Radio Canada International.  We knocked on the door, and the friendly guardian of the place happily showed us around. This site has since closed, so I’m pleased we saw it when we did.

Many years after that, my husband and I took our kids to Foymount, Ontario, near our home in Ottawa.  Foymount is noted for being the highest populated point in Ontario; also formerly the site of the annual Labour Day weekend Black Water Factory outlet store sale (which is why we were there).  Foymount also has fields-full of concrete slabs on its hilltop, fun to have a picnic on…and that’s where my interest in the region would have ended.  But my husband (formerly a military radar technician) knew that this was the site of one of the stations on the Pinetree Line.  I had heard all about the DEW Line from my history teacher in high school.  This teacher had even helped build it; going north every summer with a work crew and making enough money to pay his way through university.   But I had never heard of the Pinetree Line.  I was glad that my kids and I had a chance to explore the ghost-town-like remnants of this obscure historical site.

Friends and family continue to make me aware of industry.  An Iqaluit-dwelling friend of a friend goes further north every summer to work on the cleanup of the DEW Line.  Another friend, when our little kids used to watch “Theodore Tugboat”, recognized the scale model of the Halifax Harbour where she once worked as a civil engineer.  My Alberta rock-climbing niece had a job that involved scaling industry smokestacks to test their emissions.  Another friend grew up in the shadow of the Sudbury Superstack. 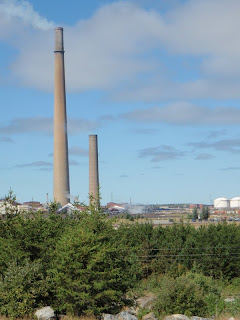 Left to myself, I will continue to require my son to be photographed with large roadside objects. 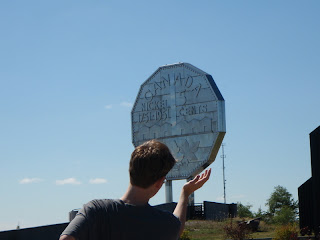