On a brutally hot Montreal summer morning in 1975, my Dad, siblings, and I rode our bicycles by bridges and backways into downtown Montreal, and left them at the railway station.  They, along with us (and Mom), were to board the train that night and head west.  A trip diary written by a 13-year-old reliably reports the important things; my diary chronicles the fact that, after checking our bikes onto the train, “Dad treated us to an orange drink or milkshake.”  It also declares the weather for the next three days “air-conditioned.”


Overnighting in coach seats is a great adventure when travelling the short distance to Nova Scotia.  Four nights of it would have been onerous.  Roomettes or berths for everyone were too expensive, so my parents booked two coach seats, two roomettes, and two berths, and we all took turns using them.  That, at least, had been the theory.  “Took turns” quickly settled into sharing.  My sisters and I easily fit two to a railway bed (trip diary quote: “I woke up this morning to find [sister] Kathleen’s feet in my face”), and my parents established a schedule in which each of us four got a roomette to ourselves on one of the nights. Our coach seats were there if we wanted them, but were mostly ignored.


For the journey, we were armed with books and card games.  My artistic older sister took the conical paper drinking cups from the water fountains and drew faces on them.  We soon had an entire collection of paper-cup people, every one of them unique.   Since bedtimes don’t matter on a train, it was also our habit to stay up till 10 PM for bingo in the dining car.  Between the four of us, we won CN coasters and CN matches.


Our other favourite activity was to stand between the rail cars and watch the scenery go by.  We weren’t really allowed to do this, but soon found out that it all depended on who caught you at it.  If a train-employee saw us there and ignored us, we stayed; if they ordered us back in the train, we went.  It was worth risking a scolding to stand outside and watch Canada go by: shield then prairie then mountain; exquisite.


The scenery most firmly lodged in my memory came on the first day: Sudbury.  It was a moonscape. Somewhere out there in that city was a girl my age, no doubt swimming in one of Sudbury’s lakes even as my nose stayed glued to the train window, drinking in the desolation.  This girl eventually moved to Ottawa and became my friend.  I told her about my fascination with that moonscape, and she told me that everything improved in Sudbury when the nickel smelter installed the superstack; adding, with some irony, “…so that the fumes spread out further and we could share the joy.”  Thirty-six years later, I drove through the region again, and to my surprise it was all green and forested.


This train took the northern route through Edmonton.  There, we picked up a dome car and used it fully to watch the mountains coming; then Jasper and the Yellowhead Pass. 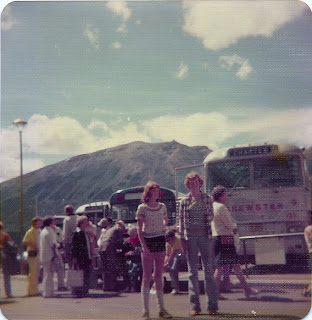 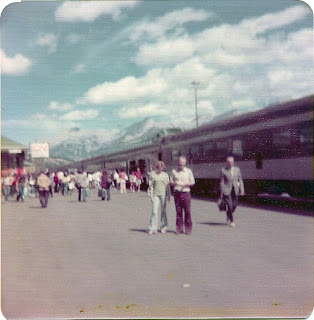 Then night fell, and we didn’t get to see the rest of Beautiful British Columbia.  I guess the schedulers at CN considered this a human transport trip and not a sightseeing excursion.  That night was my turn to have a roomette to myself.  I woke up early in the morning when the train made a stop beside a still lake surrounded by mountains.  I’ll never forget opening the blinds and seeing this sight.  It was another extreme of beauty.


I don’t know where that early-morning mountain-bound lake was, but we arrived in Vancouver a couple of hours later.  Three days of walking up and down a narrow, rolling world must have made me careless and disoriented, because on the bike ride to my relatives’, I sideswiped a bus.  The kind, anxious, attentive bus driver was very relieved that it was not the other way around. I suffered nothing worse than a black eye, but my diary glumly reports that “I had to stay in bed most of the day while the others [siblings and cousins] went swimming.” 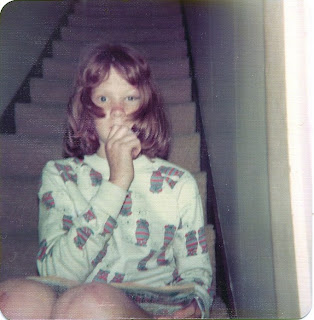 I was all better by the next day and able to enjoy my West Coast holiday.


We were in BC for almost a month, and took the train home again.  The only thing I remember about the return trip is that, because our train crossed Ontario on a Sunday, my parents couldn’t order beer.