Whenever my parents took the family to our relatives’ exquisite cottage in Tidnish, near Amherst, Nova Scotia, we travelled by overnight train.  Boarding right at our Montreal suburb in the evening, we arrived in Amherst the following afternoon.  It was always a fun train ride, and we could count on three things happening sometime during the trip: a crying baby, a loud talker, and a drunk.  In the summer of 1973, a rail strike forced us to travel home a different way.  We discovered that what the Greyhound lacked in drunks and babies, it made up for in pot-smokers.


Strikes are a common feature of our western culture, so there’s nothing unique about that aspect of my Montreal childhood.  Teachers’ strikes were frequent and welcome.  When I could stay home and read my books, instead of sitting in a classroom surrounded by a bewildering array of subjects and socializing, I was just as happy.  My education wasn’t affected by the strikes, and I have the high school diploma to prove it.


The Montreal Metro workers were another bunch of habitual strikers; but these didn’t affect me in my all-accommodating suburb.  The only Metro strike I clearly remember occurred one summer when I was in my teens.  Many, many years later, during the demoralizing 2008-2009 Ottawa Transit strike (known to me as “The Winter of Perpetual Driving”) I realized that if a city transportation company wants to prove its point and truly inconvenience its customers, it should strike in the middle of winter.  By contrast, in the middle of this fine, 1970’s summer strike, my mom, sister and I decided to walk across the Jacques Cartier Bridge into Montreal.  The bridge’s fenced walkway was like a Sunday in the park, packed with people walking, laughing, talking, and enjoying the splendid view of the city.  Wherever the Metro-drivers were picketing, I hope they were having as good a time.


The 1973 Quebec rail strike began just as our train to Nova Scotia was leaving the province; and it was ongoing while my cousins, siblings, and I were busy swimming in the Northumberland Strait, and playing “Fox and Geese” on the mudflats just down a grassy path from the little cottage.
From my perspective, there were many, many worse fates than being stranded in Tidnish for a few more weeks. 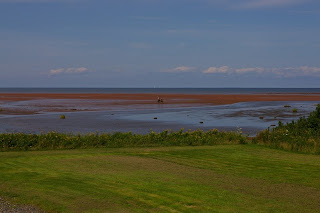 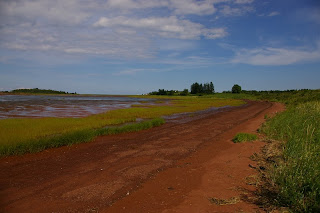 But I suppose one must eventually go home.


And so we packed ourselves and our luggage into the overnight bus to Montreal, which was driven by a pale, solemn young man.  He looked tired; already weary of the extra work foisted on him by the rail strike.  I thought about him again, years later during the Ottawa transit strike.  I knew exactly how he felt.  Our bus was comfortable enough, but you couldn’t get up and walk around, or stand outside between cars watching the unique scenery.  It wasn’t nearly as nice as the train, but it was getting us home.


Somewhere in the wilds of New Brunswick, a young mom at the back of the bus complained about the pot-smoker.  The smoke was making her kids sick, she said.  The pale bus-driver stopped in the middle of that empty, forested Trans-Canada highway and ordered the man to stop smoking.  A short time later, we pulled over again.  The pot-smoker had gotten up to go into the bathroom, and the bus driver stood at the front and declared that we would wait right here until he came out. We did.  The man was most displeased.  It was dark by the time we got to the next town, and there were police waiting.  The pot-smoker did a lot of yelling as he was led away.  Some other drivers came over to talk to our driver, and it was the first I’d seen that solemn man smile.


We made it to Montreal.  Our luggage did not; but that’s just another common feature of our western culture. The rail strike no longer affected me, so I stopped paying attention and have no idea when it ended.  But it must have come to some conclusion; because two years later we all boarded the train again, going the other direction….