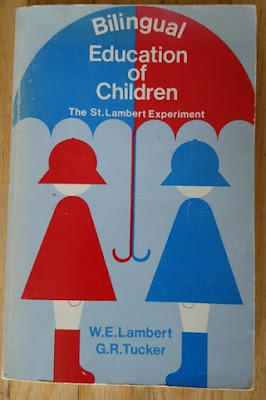 In 1965, an interesting experiment began at St. Lambert Elementary School: French immersion. A year later, I started Kindergarten at that school, remaining in the French immersion stream until grade 7. I learned the French of my European teachers, which eventually made me very jealous of my teenage friend Natalie. She and her friends from the French high school could speak Quebecois French—beautiful French, proper French—and I couldn’t.
The Montreal suburb of St. Lambert was not a natural place for an Anglophone to become skilled at proper French. This traditionally-Anglophone-now-in-transition community wasn’t changing fast enough for me; I would never have learned French on the street. Fortunately, I was young enough to learn French in school… but only just. My older brother and sister were too late for French immersion.
At St. Lambert Elementary, my Kindergarten teacher spoke only French to me and my little Anglophone classmates. I can’t identify the moment at which I knew French; as far as my memory is concerned, I always understood my teacher. My strongest memory is of the other kids, because I was scared of them. But, like any child, I got used to the school scene as the years went by.
Since I didn’t know any better, it was normal for unknown adults to show up at our school every year and set us all up in desks and chairs in the gym, where we were given a series of tests. Years later I found out that these adults were from , and their annual jaunt across the river to our school was all part of their ongoing research into the bilingual education of children.
The St. Lambert experiment was a collaboration of parents, the school board, and academic experts. Throughout our childhoods, my classmates and I were the objects of great curiosity: studied, filmed, and written up. Even my relatives were curious, often asking me to “say something in French.” For a bashful child like me, that was just like Pip, in Great Expectations, being commanded by Miss Havisham to “play!”
French Immersion only lasted until Grade 6; there was no immersion program in place at Chambly County High School down the road. In my last year of high school, some classmates and I were called to the cafeteria. A couple of adults were there. They told us that they had completed their study, thanked us for participating, and gave us each a signed copy of their book: Bilingual Education of Children; The St. Lambert Experiment by W.E. Lambert and G.R. Tucker. I was thrilled to read an account of a process that I was involved in but barely remember.
I didn’t know, for instance, that although by grade 4 our read-aloud French was perfect, we were still clumsy with spontaneous speech. That explains my reluctance to perform for my relatives. I made the hair-raising discovery that our testing had included questions designed to find out our attitudes toward French Canadians. Some details are best not remembered. Also hair-raising was the account of a discussion between the academic experts and Europeans about the idea of French Immersion for children. Some of the Europeans questioned it, saying “You’d be tampering with a child’s allegiances…” The academic experts were right to comment that, “These reactions reflect fundamentally different views of bilingualism…” Generally, however, the Europeans knew very well that a child could easily learn two (or more) languages at once. The experiment’s first teachers came from and Belgium.
Knowing a second language is very enriching, and I’m grateful that I had this opportunity to learn one so easily. The result of my K-6 experimental French immersion education is that my French is good enough to speak with an adult, so long as they don’t get too philosophical. It’s wonderful to read Bonheur d’occasion in the original language, flawlessly order a “BLT, pain brun, non-griller” at the Tim Horton on the Eastern Townships Autoroute, and follow most of Bon Cop, Bad Cop without reading subtitles. Also, my bilingualism once allowed me to get a temporary, part-time receptionist job with the government at a crucial time in my life when “temporary part-time” was exactly what I needed.
My first Québécoise teacher arrived in grade 6, in my last year of French immersion. She was cool. She was young, wore pants, and told us to call her “Dianne.” High school French was vastly reduced: two hours a week in a class full of mixed abilities. But I had no complaints, because our Québécois teacher was cool. He was young, wore jeans, and told us to call him “Claude.” After the St. Lambert experiment, the French Immersion program took off and the Québécois themselves quickly moved into teaching positions… although not soon enough for me. If I’d been a few years younger, I would have had proper teachers, and learned proper French.